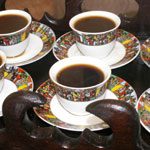 Kaffa Region in Ethiopia is the birthplace of coffee. Coffee is called ‘Bunna’ in Ethiopia, but as the use of the plant spread it was referred to as Kaffa or Coffee for the region it came from.

Originally, coffee beans were taken as a food and not as a beverage. East African tribes would grind the coffee cherries together, mixing the results into a paste with animal fat. Rolled into little balls, the mixture was said to give warriors much-needed energy for battle. Around the year 1000 AD, Ethiopians concocted a type of wine from coffee berries, fermenting the dried beans in water.

One story about the discovery of coffee claims a goat-herder named Kaldi noticed that his herd became friskier than usual after consuming the red cherries of a wild coffee shrub. Curious, he tasted the fruit himself. He was delighted by its invigorating effects, and was even spotted by a group of nearby monks dancing with his goats. Soon the monks began to boil the bean themselves and use the liquid to stay awake during all-night ceremonies. 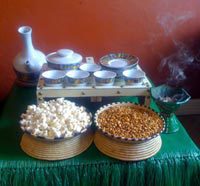 The Ethiopian coffee ceremony starts with the woman bringing out the washed coffee beans and roasting them in a coffee roasting pan on small open fire or coal furnace. The pan is similar to an old fashioned popcorn roasting pan, with a long handle to keep the hand away from the heat. The woman shakes the roasting pan back and forth so the beans won’t burn, and the coffee beans start to pop. The preparer takes the roasted coffee and walks it around the room so the smell of freshly roasted coffee fills the air.

The roasted coffee is then put in a grinder called a ‘Mukecha’. This consists of a heavy wooden bowl where the coffee beans are put and wooden/metal stick called ‘zenezena’ which is used to crush the beans in a rhythmic up & down manner, like a mortar and pestle.

The crushed fresh roasted coffee powder is boiled in a traditional pot made out of clay called ‘jebena’ (J-be-na) on the small furnace. Once the coffee is boiled it is served in small cups called ‘cini’ (si-ni).